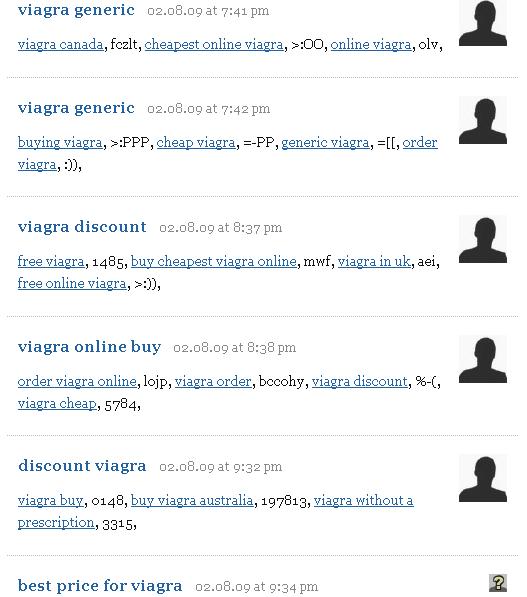 Sly Blanco, the famous dude who sold his blog for $9500 has been having his new blog beaten, swallowed, shove in the ass, destroyed, bludgeoned, attacked by spambots. Look:

And John has been his loyal reader commentator. 🙂

I am pretty much sure Sly’s really taking his time with the huge chunk of almost $10,000 that he got from his previous blog. So as the spams, taking their sweet time turning his blog to a splog.

comments and trackbacks. Of course, the more popular the blog is the higher the spam content it may receive each day. For this blog, I think it has about 3000 spam comments caught by Akismet since it started last May. Now while Akismet does a very nice job of catching spam comments from your blog, we cannot ignore the fact that we still always double check it, in case it catches false postives. Right? Although normally the rates are very low then and it seems that Akismet has improved so much since the day it started.

So here now I am going to show you other guides/tips that can help you fight and reduce spam on your blog:

So that’s it. What you will find out is that most of the solutions are just inside wordpress itself. If you know a little programming then you expand things more depending on your knowledge. Just always back up! 🙂

Since I have started this thingy I am always receiving tons of message from the contact form that are pissing me a lot. I’m not an impatient person but of course I don’t like craps. As this blog is getting read by more and more kids people there are also other things that are not so good to my eyes. Like the number of spams I am starting to receive and of course the messages from the contact form.

The purpose of the contact form is to contact. Sometimes my friends do not know how they can reach me so I put this one up. That’s also there for business purposes. But when is something not business related? Let me tell you a story. Sometime last month someone contacted me saying that their company is holding some promotional measures and would do me a free banner and logo in exchange for a linkback. During that time I think my header is fine but still I was like “Wow someone seems to be interested in my blog” But then the thoughts of beautiful design ala UniqueBlogDesigns was thwarted when the sample was given to me. It’s SO ugly that the drawing of a chicken could even look better than it. I swear! After that, I no longer respond. But that certain kept on sending me mails. After a week, they are already three! They all promote the same thing with the same company. Wow!

So things like that started off like comets falling here on earth. Most are asking/offering me about their services(which isn’t bad)! And a lot has been promoting untested networks with their affiliate links and wtf, their is even someone there saying she wants to be my husband! I guess this is really how things go. I can now understand how big and established guys and companies are having hard time dealing w/it. Before i am used to checking my email in this blog everyday, now it’s once a week and sooner it will be once a month!

Another busy week for me. I had to rush everything because I feel so behind with all the projects that we we’re doing and the affiliate products this month had a pretty bad ROI and some mistakes about Adwords. This month by far is the worst month as far as affiliate marketing is concern. So now I am going to share with you what I think about Comments.

As you can see, my blog has been getting some decent number of comments (even though the form was all white before). But what many people do not know is that comments are not usually like the number shown. Oftentimes I reply two to three times to other comments so to say I got 6 comments on a post, the real number only is three. So being a blogger for not so long time I have seen comments that are pretty ugly. Many are just lame, Some look spammy, and few make sense. I don’t really have anything against those comments in fact I am even accepting comments that contain 2-4 words only. But of course I don’t tolerate trolls.

So what about the comments? Most of the time people are forgetting that the real value of comments reflect on the person and/or site itself. Let’s say about 85% of your comments say “nice post”. The common effect here is that you just comment because you want to get commented to and that’s awful! Most bloggers will see it and despise it. And because they don’t like it, the IMAGE of your blog will not be good to those 85% of the blogs you commented! Maybe for others, it’s ok but I’m sure a large percentage will not like it. You are giving your blog a bad name around the blogoshpere. Sure it’s not wrong to say “nice post” but if you do it all the time, then wtf! I see a lot of blogs these days complaining about lame comments and this is just a message that I want to get across everyone. Comments = Your Blog = You!

How about you? Have you established a great presence in the blogging world because of you adding value to other blogs? I want to get your view about this.