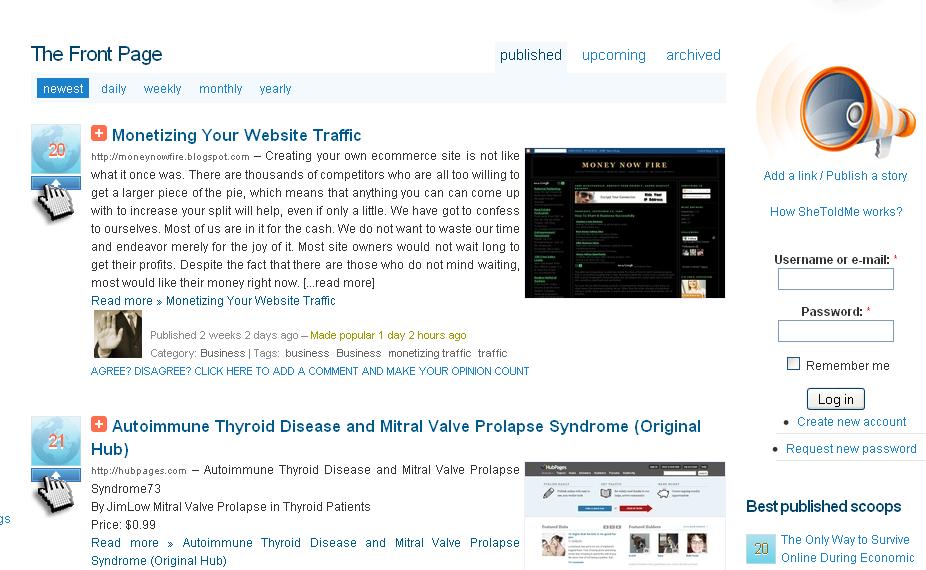 This is a paid review sponsored by James of Shetoldme.com

Social bookmarking sites are literally everywhere. You find a lot of good ones, and even a bigger number of “not-so” pleasing ones. Of course, popular social sites are the better ones because bloggers know themselves they can get more traffic with it. It can give their blog a brand awareness in front of a huge number of audience.

But what if you could also earn while trying to drive the most traffic you can to your blog? What if you could place more than 1 ad that would earn you inside a high traffic subpage? Well enough fluffs, what I am talking about here is the Social Bookmarking site She Told Me, a social bookmarking site that could help you earn using Google Adsense. Here’s a small portion of what the site looks like:

When James ordered this review and when I quickly saw the link, I was like ‘oh, this is another crappy site and I may not accept this review”.  But then I went to the site and was flabbergasted by the amount of traffic it renders. Another is that it gives the best posts a direct link (dofollow) back to the blog instead of a subpage which would later direct people to the blog. In my opinion, it’s a good thing since most people don’t have really time to scan and scan pages, and later get redirected to a different site.

So to the adsense thing. Basically it all starts by putting your publisher id in your account details. Then, when you add a post to the site, your adsense account would be the one catering the ad in that page. What specific ad? Your adsense ad would be the one placed closest to the title (and according the the owner, the one with highest CTR).

So imagine, you submitted a good post. Your page went to the front page and you get the most traffic. And at the back end, there’s also a good chance for you to get as much click as possible for your ad. SheToldMe.com has an Alexa Rank of below 50,000 so that’s a pretty reasonable amount of traffic to deal with. Just to clear things off, Adsense Sharing is not against Google Terms of Services. For more info read their Program Policies here.

Now is their referral system. The lucrative part according to them is that your ad would be displayed on every pages your referred user submits. So that’s more than doubling the income potential if the one user you referred is a quality user who submits good content. Now imagine having referred 10 of them. 🙂 For more information, there’s a page solely dedicated to the Revenue sharing part of the site

Well let’s go to the “bad” side. The first thing that didn’t go well with me was the domain name. Sure, digg, sphinn, del.ic.ous, are not really premium ones but i think the owner could’ve had picked a better one. Again its entirely my opinion that the domain doesn’t really suit the sites’ function that much.

Another probably is the design. Most bookmarking sites are Web 2.0ish in looks and shetoldme prefers not to be one of them. It’s understandable since the site is an adsense sharing site (w/c means it would serve a TON of adsense ads) and needs a big space to cater those ads. The logo is related to the domain but again I am quite puzzled with the domain and so as the logo. Aside from Adsense, the site also serves Project Wonderful ads although its very minimal. I really wish a more stylish design for the social site as it’s been time proven that attractive design is a MAJOR bait to attract users.

So if you guys would ask me if I would use that program, the answer is definitely yes! It’s free, takes 30 seconds to register and get approved, and just like any other bookmarking sites, it can yield traffic and quality links to your blog. The Adsense thing is not something I’m really interested with (I’m long banned from Adsense), but let alone the bookmarking capabilities judge for it.

And what is its difference from the bigger bookmarking sites? None! Well for me, I would always prefer to submit to smaller social sites because it doesn’t really take that much work to go up in the front page rather than with bigger social sites.. There is a considerable difference between the traffic but I would rather want to get some than totally none at all (due to the fact that it’s harder to get in the front page of popular social  sites like digg…).

All in all Shetoldme.com is a pretty decent social bookmarking site coupled with the lucrative option of earning money from Adsense Ads. Joining is free and you could start earning soon. Still, DON’T expect too much from it, money wise. Over the years, I’ve seen a ton of Adsense revenue sharing sites, mostly forums and all I can say is that 80% of the time, people’s expectations weren’t met. Again it’s a pretty good site and definitely something that “might” worth a look. Check out She Told Me