This is a paid review sponsored by Tyler Cruz

These days there are tons of things that exist. I mean even in an offline world you’ll probably come across with a lot of stuffs that boast all the same portfolio but you’ll never really know unless you do a research. Same as online! When I was starting out I was like joining and joining every of all these affiliate and ad networks in hopes that the more I have joined, the more I would earn. And definitely it’s a flop most of the times. I guess this is where Publisher Spot comes in.

Publisher Spot is basically a site that provides “informative” reviews of all of these networks and companies that an online entrepreneur should look to. I know Publisher Spot when it was in its early days. Honestly I thought it was just like one of those “run of the mill” sites that provides reviews, everything positive so that people would get in there, sign w/that affiliate link and boom profit! But then it was not

The site has a clean layout, and a sleek design. The reviews are done superbly! I mean when I look at the reviews there’s even a thing at the sidebar wherein there are details about the program. The creatives, Payment Methods, Minimum Payout, Payment frequency which I think is a very great thing. I find the review great and not biased. How hard it is not to get biased on something? 😉

The review and commenting also works for those who have an account. I think it’s great that he had only supplied it for those who are registered with the site. This prevents proxies who could just easily game the rating system. Actually these new features is something that for me had made the site way way better. The site also has a forum, which I doubt that will gain any attraction and a blog. The easy navigation of the site is great and I just like it. It makes it easier for those who are newbies and maybe we can remove the word “confusing” when we’re talking about the layout.

All in all I do feel its a great project. To be honest I had something like this long planned way back last year and that it never took off because of lack of commitment from me. I commend Tyler’s effor to produce this site that many newbies starting could surely benefit from. The only thing I didn’t like much is this: 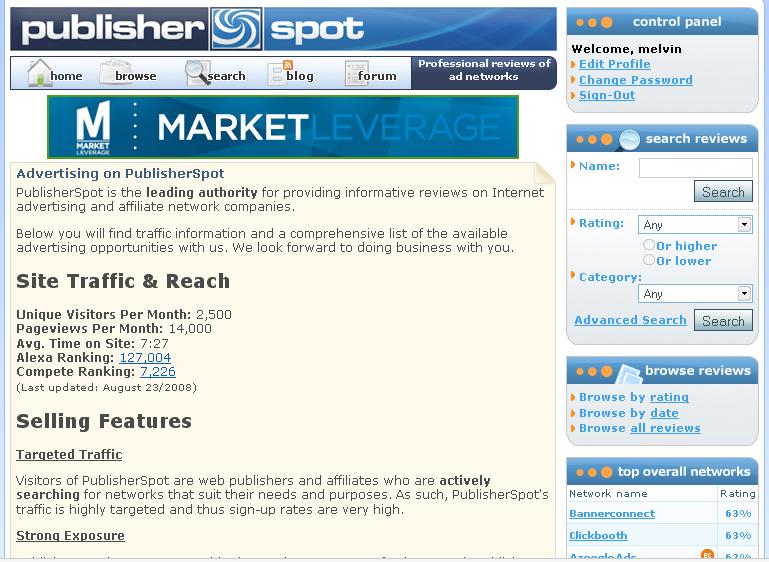 Although they are selling advertising on Publisher Spot, they are not flaunting it. The only link to itheir advertise page is at the bottom so I think its another nice idea rather than to put it uptop, announce it and have there reputation tarnished. Well I know a lot of blogs have already said their piece about it. I think its a great overall project as well as a reference for a lot of aspiring internet marketers. A great job by Mr. Cruz